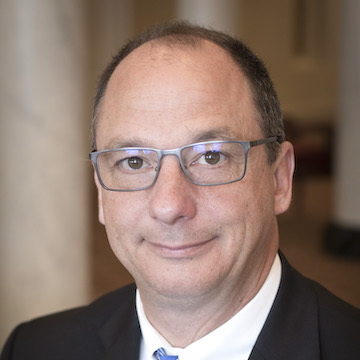 Sweere began his career in the LTL trucking industry where he worked as a billing clerk, dockworker, driver, dock supervisor, dispatcher, operations manager and terminal manager at both small and large facilities for multiple carriers throughout the Midwest and Southeast United States over a span of 24 years.

While managing a freight terminal full-time, Sweere attended law school part-time and entered the full-time practice of law in 2006 after being admitted to practice in state courts in Arkansas and before the U.S. District Courts for the Eastern and Western Districts of Arkansas, as well as the U.S. Court of Appeals for the Eighth Circuit. He went on to serve as a Director at Cross, Gunter, Witherspoon & Galchus, P.C. in Little Rock, practicing primarily employment, traditional labor, and transportation law.

Sweere earned a Bachelor of Science in Business Administration with a major in Transportation from the University of Arkansas in Fayetteville in 1988, and a Juris Doctor degree with Honors from the University of Arkansas at Little Rock Bowen School of Law in 2005. Mr. Sweere has been an active member of the Transportation Lawyers Association since 2006, where he serves as Chair of the Labor and Human Resources Committee, and the Arkansas Bar Association, where he chaired the Labor and Employment Section.